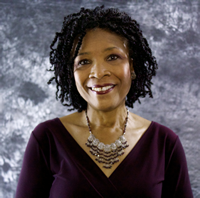 Tawara Goode is an assistant professor in the Department of Pediatrics, Georgetown University Medical Center in Washington, D.C.  She has been on the faculty of the Georgetown University Center for Child and Human Development (GUCCHD), for over 30 years and has served in many capacities.  She has degrees in early childhood education, and education and human development. Professor Goode has extensive experience as a principal investigator for federal and private sector grants and contracts. She is the director of the National Center for Cultural Competence (NCCC) at GUCCHD. She is also the Deputy Director of the GUCCHD’s University Center for Excellence in Developmental Disabilities and focuses on national level efforts to advance and sustain cultural and linguistic competence in this field.

The NCCC has been in existence for the past 21 years during which Professor Goode was the director for 19 years. The mission of the NCCC is to increase the capacity of health care and mental health care programs to design, implement, and evaluate culturally and linguistically competent service delivery systems to address growing diversity, persistent disparities, and to promote health and mental health equity. Professor Goode is recognized as a thought leader in the area of cultural and linguistic competency and building the NCCC into a nationally and internationally recognized and award winning program. She had a primary role in developing curricula, assessment instruments, professional development series, and other resources that support cultural and linguistic competence.

Professor Goode is actively involved in the development and implementation of programs and initiatives in the area of cultural and linguistic competency at local, national, and international levels. These efforts address the needs of diverse audiences including health and mental health care, public health, social services, community/advocacy organizations, professional societies/organizations, and institution of higher education. Professor Goode has conducted research on cultural and linguistic competence and its role in addressing health and health care disparities and is currently involved in several studies: 1) a collaborative effort to create validated instruments to measure cultural and linguistic competence in health care settings;  2) a multi-site project to examine health disparities for populations at the intersection of race, ethnicity, and disability; and 3) a community-engaged study to examine if barriers to participation in research by racial and ethnic groups (other than non-Hispanic White) can be reduced by “truth and reconciliation” community forums designed to acknowledge past injustices and exploitation committed by researchers and research institutions and to foster reconciliation. Professor Goode serves on two research grants including: Georgetown-Howard Universities Center for Clinical Translational Science and the Georgetown University Center for Excellence in Health Disparities in the Nation’s Capital.

Professor Goode currently administers three grants from the Administration on Intellectual and Developmental Disabilities including the Leadership Institute for Cultural Diversity and Cultural and Linguistic Competence, Community of Practice on Cultural and Linguistic Competence, and Diversity and Inclusion Training Action Plan.  Each of these grants focuses on: 1) increasing the number and capacity of leaders to advance and sustain cultural and linguistic competence to respond to the growing cultural diversity among people with developmental disabilities; and 2) developing curricula and professional development for current and future professionals that will teach, provide services and supports, and conduct research with and on behalf of people with developmental disabilities, their families, and the communities in which they live.

Her publications include peer reviewed articles, book chapters, monographs, policy papers, guides and instruments that support cultural and linguistic competence in a variety of human service and academic settings. Professor Goode has and continues to serve on numerous boards, commissions and advisory groups at the local, regional, and national levels that are concerned with the health, mental health, and well-being of culturally and linguistically diverse populations and communities in the U.S. its territories, and in tribal communities.